6 Myths About ADHD That You Thought Were True 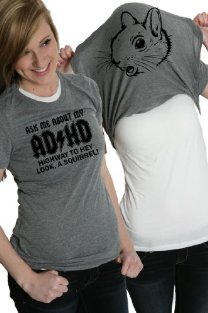 There is a lot of misinformation about ADHD in the world.

Some of the misinformation is because we don’t fully understand it or what causes it. Regardless of what or why, the misinformation can make your kids (and you) feel completely inadequate and make it harder to adjust to the condition. Lets look at the 6 common myths about ADHD.

ADHD is not real

ADHD is, in fact, a real, honest to goodness, condition that affects how the brain works, especially in the center that controls concentration, focus and activity. Scientists don’t know exactly what causes ADHD, but they are gaining insights into how the brain works and conditions that can interfere with its proper functioning. But they do know that ADHD is a true disorder that begins in early childhood (ages 5-8) and can last into adulthood.

ADHD gives an advantage to kids in school

I had never heard this one until doing research about ADHD. It blows me away that someone would think this because I saw my own daughter struggle with getting work done and remembering to get it to the teacher when it did get done!  Regardless, ADHD is a classified disability according to the Individuals with Disabilities Education Act (IDEA). Because the brain functions differently in individuals with ADHD, it is hard for them to concentrate, stay organized, comply with classroom rules and participate in group activities. Classroom modifications make it easier for your child to take advantage of the same opportunities that other kids have. Without such modifications, it is harder for children with ADHD to learn successfully in the school environment.

ADHD is caused by bad parenting

ADHD begins in the brain! Sure, a lack of understanding on the parent’s part might make behaviors associated with ADHD worse, but your parenting skills (or lack of) DO NOT cause ADHD! Parenting is not an exact science but it doesn’t  lower the level of neurotransmitters in the brain. Your parenting skills will need to move up a notch when it comes to facing the challenges of ADHD, but you did not cause the condition to affect your child in the first place.

This is a long time argument in the world of parenting and doctoring. But, some think that medication might actually be under-prescribed. Medications are not cheap and some groups based on socio-economic status are underrepresented in the diagnostic statistics. For example, minority children are less likely to seek treatment options due to cost, language barriers, availability and lack of perceived need (stigma that may surround the condition).

ADHD is a childhood condition

As I shared before, I believe my ex-husband has ADHD. My mother believed that she had it, and my coaching partner, Julie was diagnosed as an adult only when her son was diagnosed. Children with severe ADHD symptoms will more than likely have to deal with the condition as an adult. Changes in their behavior and medication in childhood can translate into an easier transition into adulthood. What we see as a lazy adult, or one who can’t seem to stick with something like a job or a relationship might actually have ADHD.

ADHD disables you for life

A disability is a part of you, but not who you are totally. ADHD doesn’t define your future when you use all the resources at your disposal to fight back. Several famous people who were diagnosed with ADHD were able to make their disability work for them, including George Bernard Shaw, Benjamin Franklin, Mozart and Abraham Lincoln. But you don’t have to be famous to make a success of your life with ADHD!

So, I agree that ADHD is a challenging condition, but I think it is something that we can help prepare our kids for and learn to manage in our adult lives too. With more and more studies and information on how the brain works, there is hope on the horizon!

Which of these myths have you not heard of?