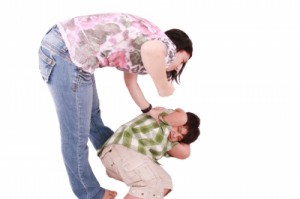 While some of you will be pissed off at this comparison, I think it’s true in many cases for our kids – and some of us adults too. You can train your kids just like you can train your dogs. The good behavior will become a good habit after practicing it.

We’ve seen this with my daughter’s changes in food requests since being diagnosed with diabetes. Instead of trying to get out of eating healthy stuff, and sneaking the bad foods, she is trying to earn the yummy treats that she can have with the new diet.

2. What Constitutes a Reward?

If you’re going to use positive reinforcement, there are some techniques that are considered healthier than others. Just like training your dog, using food, praise and fun are some of the best ways to help them learn.

* Food – Experts nearly all agree that using food as a reward is not the healthiest thing to do. It may encourage your child to grow into an adult who seeks comfort food as a reward for something, which becomes anything…your child may end up eating “treats” any time he or she can come up with an excuse. This is something we are worried about as in my example earlier, but we are working on making it less of a reward to get food, and more about making better choices when it comes to her foods.

* Praise – Verbal praise is a great way to offer positive reinforcement. Your kids want to please you (really), and knowing that they’ve made you happy and contributed to a happy atmosphere helps reinforce the good behavior. Even though she rolls her eyes when I tell her she did a good job, I still tell her, and I thank her for being patient or displaying the “right” behavior in a given situation.

* Brag – Tell the rest of the family about the good thing that your child did. You don’t need to overdo it, but let the other parent know in such a way that the child can hear you bragging on him. This makes anyone feel good!

* Extra privileges – Does your child like to watch videos? Does he like to read? Try giving him some extra time for those activities as a reward for desirable behavior. This has been hard for all of my daughter’s life. Sometimes, finding the right thing as a reward or privelege is hard. What matters today might not matter to her tomorrow.

Avoiding negative phrases is key and is often as much about retraining yourself as it is about using the right language with your kids.  Instead of telling your kids they’re so annoying/frustrating/aggravating/hopeless/etc., verbalize their strengths and positive attributes. It’s amazing how negative language can drag your kids down and cause them to behave badly.

Keep the negative language to a minimum, and when you do mess up, apologize to your kids and let them know why such negative words are not a good idea. You might ask them how it made them feel when you said those negative things, too. Then they’ll be likely to feel heard and validated – which means you just turned a negative “moment” into positive reinforcement!

Coming through the fog, an interview with author, Tami Goldstein Even You Can Do Yoga. Review of My Yoga Online.com