Back To School Again – Stress and Anxiety All Over Again 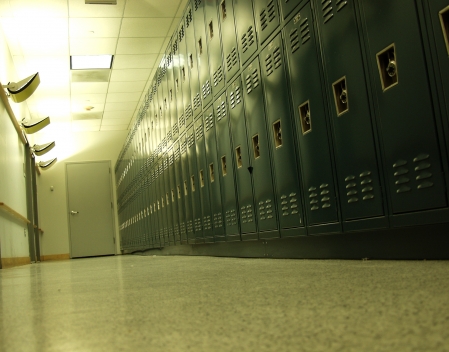 The school year is starting up for us next week. I can’t believe 2 months of camp and a trip to the hospital is already over with! But, school is full of anxiety for all of us in our house and Friday brought new worries. Let me explain why school is tough.

Both my girls have gone to school in the town we live in, which is a suburb of Wichita, KS. Our town’s school’s have a great rating when it comes to teaching, and test scores – unless you have a kid with autism, apparently. My oldest will be a sophomore this year and has told me a few stories of how the middle school here is not great for kids with any type of disability. The therapy staff has told me the same thing about the kids they’ve worked with while in the school system here.

So, last year after a start at her alma-mater, my daughter was moved to the school for behaviorally challenged kids, about a half hour’s drive from here. There was no slow transition like we’d been told there would be. She was at one school for a week, then transferred to another overnight.

Now, the new school, called Prospect, turned out to be just what she needed, but the first half of the year was a nightmare. They placed her with a single teacher, not in a classroom. The teacher was new to their system and didn’t appear to understand autism or my daughter at all. I ended up spending lots of time there because my daughter had melt-downs and really upsetting behaviors.

Part way through that ordeal, we found out that she had been molested by a neighbor boy too. Not the best transition period we’ve ever been through!

However, from Christmas to the end of the school year, she did so much better even with finding out she has type 2 diabetes. Now that I write it all out, last year was hard. Really hard. But, she was doing so much better and really had made some good friends. She was actually looking forward to going back.

At the end of the year, like 2 days before the end, the autism expert for the district called to say they had a special autism room approved  for older kids. My daughter had missed it by one year when they set up the autism room for younger kids the year before. But, this new room was not in our home town, or even close to Prospect. It’s in a completely different town and it’s just as far from home as Prospect was.

It filled me with anxiety when we toured the school.

They have a good record and a great special education  program there already, but it means new teachers, new staff, new everything…….

Friday, the autism expert called me with good news and bad. The special ed coop thinks that my daughter did so well at Prospect that she shouldn’t stay there – that she can’t stay- and that she either has to move to the new school or come back to the home school where their special ed dept. sucks.

We have less than a week before school starts again. Can’t they make these decisions with a little more time?

The one good thing was that she told me of another boy who is going to the new autism room. She told me to tell my daughter his name and see what her reaction was. So, I did, and it made all the difference! She said she’ll go. She’ll try it. She likes the boy though she didn’t know him well.

Now, we wait to meet the new teacher and get acclimated to a new place all over again.

What Grief Looks Like For You Is Different Than For Me