Don’t Sweat Small Stuff; Chapter 9: Give The Spotlight To Them 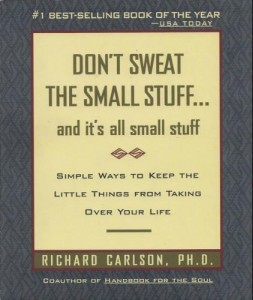 Ego is the part of us that wants to be noticed, wants glory and acknowledgement and can often derail our relationships. My experience as a special needs mom is that my ego gets squashed often by my child and the adults who don’t understand her.

In chapter 9 of Don’t Sweat The Small Stuff : And It’s All Small Stuff

we learn about letting others be the star if only for a few moments. We learn about not usurping their joy and not giving them the acknowledgement they need.

What might that look like in your everyday life? Say you are in your support group with other moms. One mom shares how hard of a morning it was with her son. He fought her and physically hurt her just because he had to take a shower and get ready for the day.

Your first inclination might be to say “oh yeah, I’ve had days like that with my daughter.” But, that takes the focus off of her, and puts it onto you, right? While we might think that sharing with that mom that she is not alone, that we have to deal with that behavior too, it takes away her chance to let out those feelings that are building up inside her.

So, what if you take this approach instead?

When she shares about her day with her son and his difficult behavior, you say something like….

“That must have been hurtful – how did you deal with it? Did you cry or exercise or do something else to let go of the stress?”

You’ve both acknowledged her pain, and asked her to share more of her story.

You passed the ego back to her. Ego isn’t a bad thing, but it’s something to be aware of in relation to other people that you deal with. It can get in between you and the person you are trying to communicate with.

What I’ve found is that the more I’m able to do this – to acknowledge someone else through their own story, the more often someone allows me to share my own story. So, in the long run, ego gets its time in the spotlight, but not at the expense of someone else.

Do you see the value in this?

Has anyone done this for you – allowed you to hold the spotlight until you were done sharing your story?

Tell me in the comments below.

Have you read the book,Don’t Sweat the Small Stuff–and it’s all small stuff ?

You can buy the book at Amazon in hard cover, soft cover, and the kindle cloud version which you can read right from you computer!

Don’t Sweat the Small Stuff and It’s All Small Stuff: Simple Ways To Keep The Little Things From Taking Over Your Life

The Don’t Sweat Adventure is a grassroots effort that I’m participating in as a single mom blogger of two kids with special needs. You can connect with the #DontSweatAdventure community on Twitter.