How a child not heard gows up

In my last post about the parenting class based on the book Fantastic Families by Dr. Sinnett and Joe Beam, I talked about the 5 major symptoms of unhealthy relationships.
Today I want to let you in on what those unhealthy things do to a child when they grow up and how they affect every adult relationship along the way.

My knowledge doesn’t come from the book or the class, it comes from first hand experience. My mother grew up with nearly every one of the 5 symptoms in her family yet she didn’t know any better and neither did I as I grew up under her emotional discontects.

My grandparents are both gone now and what I know of them outside of a few personal experiences at holidays or a weeklong summer vacation is only through the eyes of my mother. She moved away from home when she could, in part, to escape, but it didn’t work. The memories and emotional baggage went with her even though her family wasn’t there continue adding to the already raw wounds.

Before I go on, let me say this. Her family was doing the best they knew how. My grandparents both came from difficult settings and in a time when it was common to not share feelings, and emotional issues with each other, let alone the community. They weren’t cold, unloving people and I do remember them with fondness.

However, there was physical abuse, sexual abuse, and negative speaking in the household. One of mom’s brothers was born with many medical issues – cerebral palsey, siesures, and several other things. He did not live to adulthood and I don’t remember anyone other than my mom and my oldest aunt talking about him. So, along with the abuse, mom and her siblings were raised in a house were children were seen and not heard. Mom’s sexual abuse was swept under a rug and not dealt with emotionally. I’m sure her brother was beaten over it too, which didn’t do anything to help. 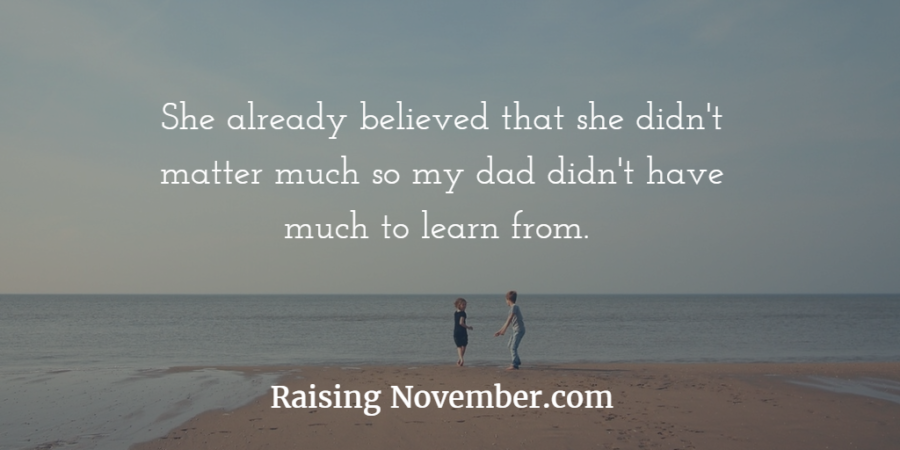 When my mother left the house as a young adult, she married my father, who was not so emotionally well rounded either and he is another story entirely. He did not know how to listen to her any better than her family had, but he told he loved her and that was probably more than she heard at home. However, you need to remember here that she had no basis for good communication and she already believed that she didn’t matter much so my dad didn’t have much to learn with or from in her behaviors.

Talk about a no-win situation!

For 25 years they did their best. Trying to communicate, not hearing each other, and not listening to each other or to themselves.

My mom’s belief that she did not matter was deeply rooted. How she raised me, I don’t know. As an adult I never once felt like I did not matter – at least from her. I always felt love, connection and praise from her. Despite her often debilitating depression, migraines and other emotional disconnect, she taught me to believe in myself and that she believed in me.

It was not until my daughters were born that she began to believe in herself too. Maybe that isn’t the right emotion exactly, but when my older daughter began to show signs of ADD, mom was the one who did research on the disorder and she began to recognize the traits in herself. She also began to understand there were reasons for her behaviors, that were not dependent on her will. She finally found a reason that her family was often frustrated with her lack of follow through, inattention.

She’s not fixed, in fact, she hates that term – fixed. But, she’s come a long way. Last week, we had a yelling match and I think she finally heard me. Remember, she only hears what she thinks others are saying? Her brain is trained to only hear the negative, that she doesn’t count, that she’s not worth love and positive attention.

Well, thank goodness, I’m stubborn. The fight was over my suggestion about a different treatment for  her headaches which have been worse for months now. She thought I was trying to “fix” her, while I was saying how much I love her and value her and want her to feel better for the sake of feeling better, not just because she is more enjoyable to be around. She, along with every single person, deserves to feel the best they can!

It took yelling and tears before she understood what I was saying, and I’ll have to keep telling her.
I’m working to reverse all the mental, emotional and physical abuse she’s taken and relived for her 58 years.

Don’t do this to your children and grandchildren! please.

I actually need to thank my mother though, not for instilling in me self confidence, but for being an example of what I need to teach my own children – both with impulse and emotional control issues. Hopefully, my learning experience with mom will help me with them. 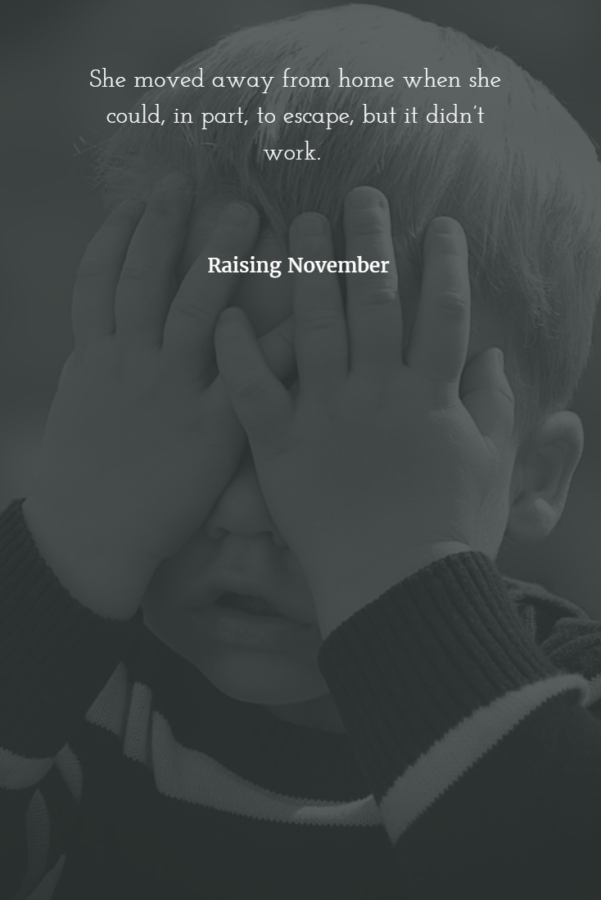