Last December Nove had 6 teeth filled at the dentist’s office and she has had some lingering pain since then. This post is a demonstration of How Not To Fix Tooth Pain When You Have Autism.

This lingering pain has come and gone. We weren’t sure it was real, until it was probably too late. 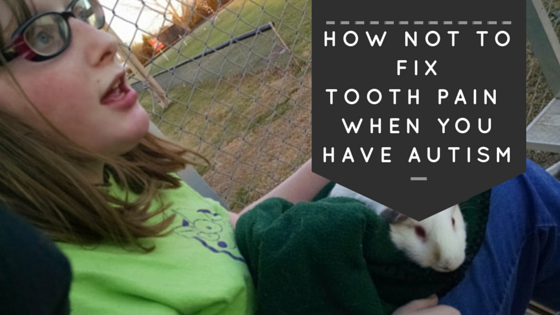 She didn’t feel pain before!

What you should understand is that she has spent her life not feeling much. Her pain tolerance was crazy high. She had an abscessed tooth at age 3, a broken arm in Kindergarten and a broken foot in 4th grade. None of which made her cry. In fact, the first two didn’t even phase her and we had to see a physical symptom before we knew for sure that something was wrong!

None of those issues made her cry. In fact, the first two didn’t even phase her and we had to see a physical symptom before we knew for sure that something was wrong!

So, this last 6 weeks was heart breaking for me. The pain in her mouth was so bad that she would react with her whole body when it came on. Her arms and legs would be stretched out to their limits and she actually cried in pain.

There was yelling and hitting and anger at the pain and frustration too, but that’s pretty normal for her. Crying is not.

It took 2 dentists, 2 trips to the ER and our family doctor before we could get it taken care of. It was incredibly frustrating for all of us. I’ve never felt more worthless as a mother because I couldn’t help her.

Finally, we took her into the doctor when she was in the middle of a pain episode. She had worked herself up so much over the fear of the pain and the real pain that her anxiety levels were off the charts.

The doc gave her a shot which brought her down within about 10 minutes. Unfortunately, that shot later made her sick to her stomach. I don’t think it bothered her though. She’d much rather throw up, than have the pain.

She was in much less pain for the next 30 hours and we all managed to get some sleep before she had the tooth pulled.

One thing that doesn’t come through in that timeline above is that it spanned about a 3 week period before we got her tooth pulled and another week when she was healing up from it.

During those weeks, we were up at all hours of the night with her in pain. I’ve not watched that much TV in a long time! We would just sit on the couch cuddled up watching TV quietly so others could sleep.

She would be holding her cheek, and sometimes the pain would spike so she’d get up and walk around looking for something to lash out at.

It’s now been about a week and a half and it appears to be fine. No more pain.

There was a lot of missed school, and a couple of days where she was willing to get out and distract herself. The photos in this post are from our trip to the park on a nice day. One of our dogs, Kiko, and her special guinea pig, Pebbles are with us.