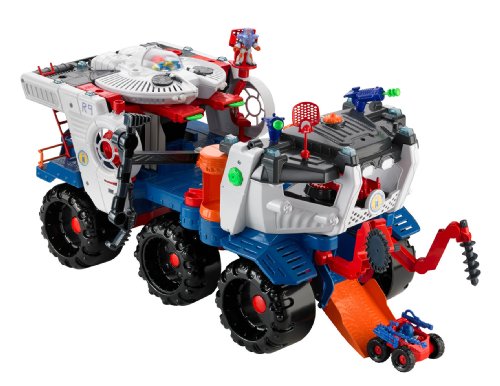 The Imaginext 2-in-1 Supernova Battle Rover was at the top of most toddlers’ must-have Christmas wish list. This formidable vehicle is one that’s built to save the world!

Kids age three and up are going to love this toy. It’s all about battling the bad guys in outer space – aliens trying to destroy the Earth. It’s perfect for helping your child gain mobility skills and also strengthen their imagination.

While there are some small, hand held vehicles perfect for a toddler’s use, the Imaginext 2-in-1 Supernova Battle Rover is giant sized! Plus, they can take off the space shuttle and use that separately if they want to.

The space shuttle that comes off of the playset, has projectile launchers and a control panel that kids can activate on their own. There’s a smaller vehicle that comes out of it with three figures they can use for game time.

The shuttle is my favorite feature. It shoots disks out of it, and not slowly. They really shoot out!

There’s even a drill, crane and saw blade that pulls out for them to play with as they pretend to be exploring outer space and keeping aliens from attacking us over time.

There’s a really cool claw with a pincher on it that your child can use to pick things up. The giant vehicle comes with six large wheels to carry everything around on – and it’s big enough to fit several things on it, like other figures and accessories – or even smaller vehicles.

It’s packed with lots of interactive play elements, and it uses 7 AA batteries that are not included in the toy, so make sure you buy those separately. Your child will be able to use the projectile and lights (19 in all), along with disc launchers.

He or she will have a blast playing with the alien detecting area and listening to the 200 sound effects that are built into the toy. Kids will want all three figures that come with it, but you can buy others separately if you want a robust community for your little one to engage with.

The ones it comes with are great – there are two astronauts and a gnarly looking Cyclops alien they have to deal with. But who says it has to be a bad alien? Since it’s up to your child’s imagination, these figures might just forge the next great alliance of the universe – and it all starts with the Fisher-Price Imaginext Supernova Battle Rover.

When Are After School Activities Too Much? Lark Pro Sleep Monitor Silent Alarm Clock and Personal Sleep Coach

Without Suffragette I Wouldn’t Be Here