If you’ve read my blog, you’ll know that my youngest daughter has diabetes. We though it was caused mostly by one of the medications used to help control her mood. She also has autism, which is why her moods need to sometimes be controlled.

However, I’ve recently weened her off that med and her eating is still pretty off the charts with her blood sugars being high sometimes, seemly out of the blue.

However, one great thing about her diabetes is that we’ve been forced to find better ways to eat, and not just better, but more interesting and yummy things.

The recipe below is just one way we’ve adapted a regular recipe that I found on Pinterest. I’ll link to the one that inspired our version below.

Please keep in mind that I’m not a photographer, so my photos of food are not pretty. I only took photos to help show what I do for this process, though it’s really not hard to understand.

Anyway, here’s how I make our version of……..

Start by laying parchment paper on a baking pan/cookie sheet.

Layout the weenies to one side of the pan so you have space to work them around as you wrap them. (my paper looks funny because I baked some pepperoni on it earlier for lunch.) 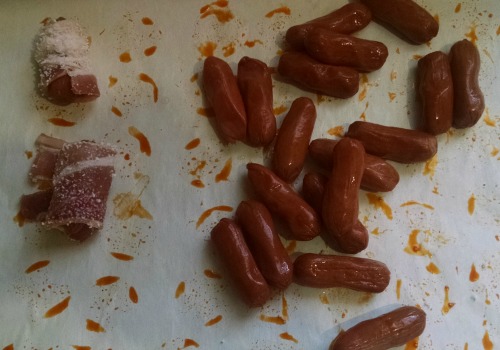 Cut your bacon strips into half or 3rds. I find that thicker bacon works better halved, whereas the thinner sliced and more fatty bacon is better in thirds because it stretches more.

Now, use a plate or larger shallow bowl to pour out your sugar sub.

{ here’s a note. The original recipe calls for brown sugar which is typically pretty high carb, so you can make your own light brown sugar by mixing the sugar sub and molasses together. However, I have found that is sometimes not so easy to get a great texture from, so what I will do is after the weenies are dipped in sugar sub and wrapped, I’ll drizzle the molasses on top of each one. Keep in mind also that molasses has carbs and they can add up fast. } 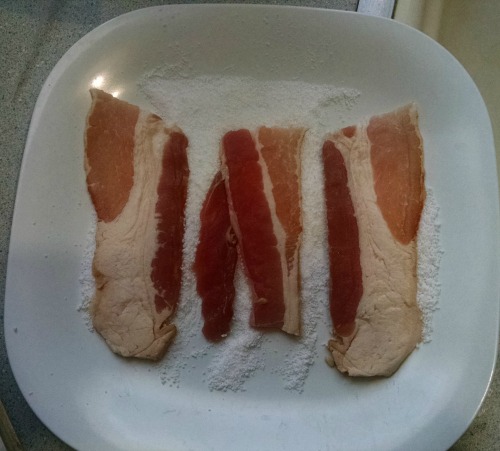 This is the fun part! Unless, like me, fresh, uncooked meat grosses you out. I had to resist the urge to wash my fingers after each strip of bacon was touched. ick.

Now, wrap a strip of bacon around a weenie and lay it down on the clear side of your baking pan. 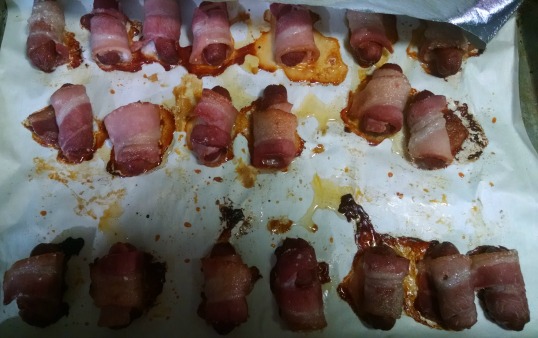 Do this for each weenie you have until you run out of weenies or until your pan is full.

If you choose, now is when you can drizzle the molasses on top of the weenies.

Bake the weenies for about 20 minutes.

While those are baking, you can start your creamed beans. 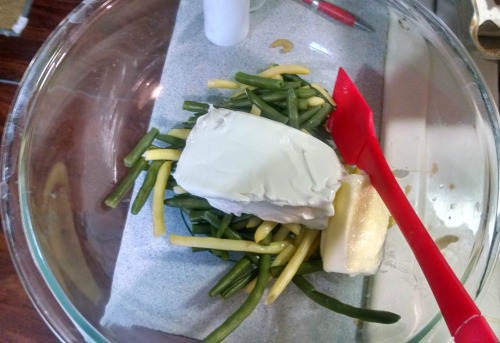 Cook your green beans according to package directions. When they are done,  you will add in your cream cheese and butter and stir over the fire, or melt for about 1 minute in the microwave.

{set your cream cheese package on top of the stove while your oven is heating up and it will get really soft and easier to stir!}

Add seasoning to your hearts desire. 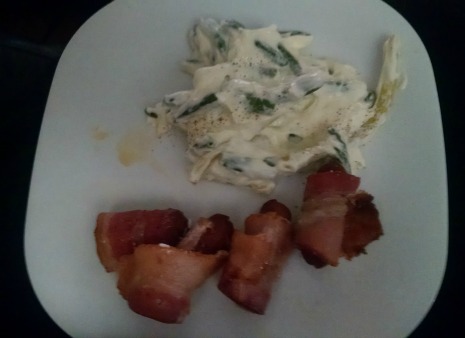