I had a reader reach out to me a few months ago about a family member who was diagnosed with Type 2 Diabetes and who also has autism. He’s older than my daughter and they are facing some very tough choices and a major lack of education and info. 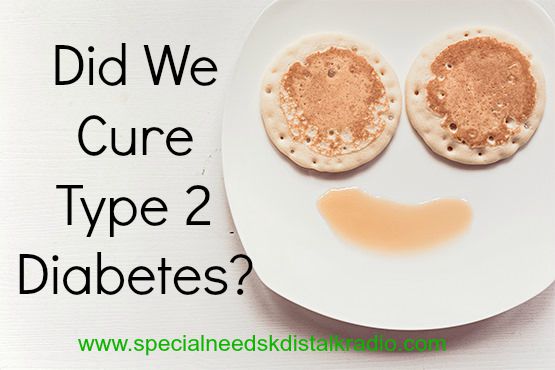 We’ve had an email conversation and I thought it a good idea to share with you the same info I just shared with her. My daughter has pretty much recovered from Type 2 Diabetes!
I’ve said it before here – How to start a low carb diet for diabetes – and depending on what’s causing your Type 2 Diabetes, you can cure it.

We just went to our diabetes check up today. It’s been 3 months since her last check-in and A1c test.
I don’t know if you can compare your brother and my daughter or not, but here’s her facts so far.

I believe with about 90% of my heart/mind/experience that getting her off the Risperidone has made the difference here. Everything else has helped, though.

Disclaimer: I am not a doctor or medical professional at all. I cannot tell you what is best for your family or yourself.

However, there is little or NO information about managing diabetes for someone with a mental or emotional delay or disability. Her diabetes doctor verbally admitted to me today that she doesn’t know much about autism. For that reason alone, I share our story.

Without the help of someone who could point me toward a safe low-carb diet and all the substitutions that would help keep my kid happy, we might not be where we are today.

Without a very understanding psychiatrist who actually wants to see less meds given to our kids, we might not be where we are today.

My reader says her family member has high blood sugars but they can’t test him very often due to behaviors (avoidance, fear).

My reader says her family member sneaks food, and experiences life through food and that the family eats out often. He’s also of age and will get out of the house to buy food or drinks.

How we’ve done it:

We locked up everything and put a LOUD alarm on the front door at the height of our problems with her. The alarm would deter her, and was so loud that we heard it no matter what.
She still sometimes sneaks stuff – tonight, she grabbed the last 2 garlic cheese breads when I walked out of the room, for instance. But, overall, we have a handle on it.
We made substitutes to food for home, and found alternate ways to eat when we were out. Things like removing the buns from our burgers and getting salad instead of fries – or at least opting for something like sweet potato fries, or cutting the serving in half.
I know we were lucky in that she was willing to use diet pop, instead of regular and that she was not a kid who would only eat a few things due to texture or smell.
As you can see, it’s taken a couple or three years now to do it.
I know it’s a hard battle, even our doctor admitted that she doesn’t know much about autism today, which is why she asked for my honest opinion about cutting the meds all the way down.