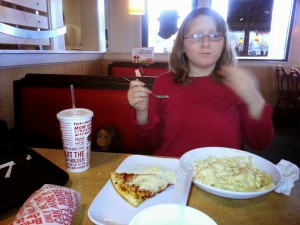 The holiday breaks from school can be some of the hardest times of year for our special need kids. But, they can be even harder for us parents.

Breaks from the normal routine and schedules that go with school can be hard to navigate. What do I do with my kids all day long for a week, or worse, two weeks? The anxiety of not knowing what happens or when it happens can send my daughter into hysterics and I try my best to give her visual cues by using a calendar or paper charts.

But, beyond the schedule upsets is the boredom that comes with not having set things to do on holiday breaks. Two years ago I found an agency in our area that provides respite, therapy, and case management services for kids with developmental and physical delays. My daughter atteneded their summer camp 2 years in a row. What’s great about this agency is that they also provide camps during the holiday breaks like Christmas, Spring Break and others.  {photo: Nove at lunch before going to critter campn with her new American Girl doll}

However, this year, they are only doing holiday camp, Thursday, Friday and Saturday which doesn’t work for our schedule, and it doesn’t help keep my daughter busy on days when she’s not with her dad and before school. 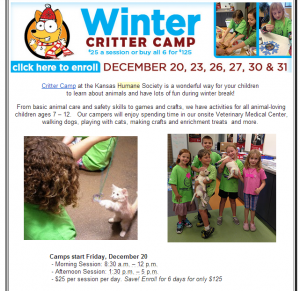 It almost seemed like fate that after confirming the schedule would not work this year for us when I opened up email to see an ad for our local animal shelter’s camp. Apparently, they have been doing this for a while and they provide camp several times a year also. But, I’d not heard of it before.

So, after playing phone tag for  a couple of days I was given the email for the KS Humane Society camp’s director. I sent her a note about my daughter and her needs. Nove is considered a-typical or high functioning autistic, but not on the level of aspbergers. She seems pretty normal until she gets stressed out or has a toileting issue. She also has type 2 diabetes which is mostly managed through diet.

The camp’s director was awesome and responded with information and a couple of clarifying questions. She said they have had a few other autistic kids attend and do well. She also let me know that one or two days, the campers would be viewing a surgery on one of the animals and that my daughter could opt out of that viewing if she needed to.

I felt good about sending Nove, so I asked her if she wanted to go. It was a resounding yes!

So, I signed up and paid for 3 half days. At $25 per half day, they get a t-shirt and snacks during the day, but also doggie treats to take home if they want. Since all three of our dogs are from the humane society, and our guinea pigs are adopted too, I thought it was a great idea to help Nove see how things are run at the agency.

It didn’t look like a big crowd when we dropped her off, and that was probably a good thing. When we picked her up, she was super happy! Considering her moods have been wonky, I did not know what to expect, but she was smiling and happy to share what she did during the day, which is not always typical for her.

They did not watch a surgery, but did play with the kittens and a puppy. She said something about a woman who was supposed to come speak to them, but did not. I’m guessing that the woman was going to give them some education, since their flyer said they’d get some information on taking care of animals. She also told me about making dog treats and showed me that she had a recipe to take home.

She has two more days of camp; this Friday and next Monday. I hope that things go as well the next few days. And…. I secretly wish I could go too.

So, maybe if you have a child who is able, you can see if there is a camp similar in your area. Animals can be very healing for anyone, but even more so for kids with behavioral or emotional dysfunction. Animals don’t judge, which makes them so awesome!

What do you do with your kids during school breaks?